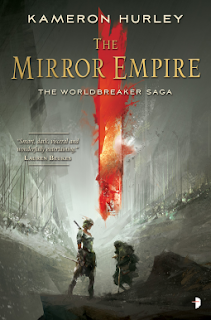 The star of Oma is rising for the first time in two thousand years. As a result, many who were considered ungifted are finding their magic. At the same time, a new enemy has been terrorizing the Saiduan to the North. They look like the Dhai, but that is all they have in common. This book follows many characters in their attempts to understand and survive in the time of Oma.

Even before I finished this book, I knew I was going to buy the next one. Or at least add it to my wishlist in case someone wants to buy it for me (Fluxxdog?). This book was bloodier than I thought it would be, but that's what happens when you have characters who can use blood magic. At the same time, it was so very, pleasantly different that I kept reading and enjoying myself.

I absolutely loved the fact that there is no one standard for "civilized society" in any of the countries represented in this book. The Dorinah are very strictly matriarchal (it's actually very dangerous for a man to go outside by himself). The Dhai are less strict on gender roles and even have five different pronouns that you can choose from for yourself. The Saiduan are more patriarchal and you will have your gender pronoun assigned to you from the three options.

As nice as those sound, the men in Dorinah are highly uneducated and are possibly even lower than the dajian (enslaved Dhai). In Dhai society the new Kai is covered in the blood of the old Kai while a feast is made from her entire body. And The Saiduan find glory in death.

There is so much of this world to learn and all of it is incredibly interesting. It wasn't just politics, either, which was my absolute favorite part of this book. The world it takes place in has very actively carnivorous plant life. There are riddles. There are magics based on the ascendance of stars and technologies and medicines built off of them. There is so much to this world and there is clearly so much more to see! This is why I need to get my hands on the next book.

Additionally, I appreciated that I never felt the need to smack sense into a character. The main reason these characters do something stupid or naive is because they've had information withheld from them. The new Kai, Ahkio, is never given the full account. Roh is never told about one of his most potent abilities. Lilia is made purposefully ignorant of her homeland. I read these characters and I think they're doing the best with what they're given.

This is a longer review than I was expecting and I still haven't said everything I want to say. To sum up, this is a great book full of dark fantasy and amazing world building. I'm very interested in seeing where this world goes. 4.5 hoots!