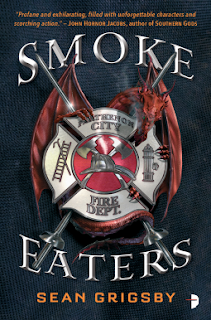 It's the year 2121 and firefighter Cole Brannigan is literally one week from retirement when he receives his last call. Confirmed, no dragons. At least, until a dragon shows up anyways. Instead of dying, however, he is found to be resistant to smoke and fire and ends up recruited into the Smoke Eaters, a special branch of the firefighters dedicated to fighting dragons. He's old, and everyone admits that, but there are too few Smoke Eaters and they need all the help they can get. Now he has to survive Smoke Eater training, dragons, wraiths, a mayor with a vendetta, and his wife's temper.

I had a lot of fun reading this book. It was one of those books that made me worry I'd miss a bus stop because it was so engaging. It's not too surprising, this book has so many elements that I love. You've got a cast of characters, with attitude and mild superpowers, who are up against ancient monsters, robots and a corrupt government. Seriously, what's not to enjoy?

The world this takes place in is a very interesting blend of fantasy and science fiction. Using contemporary understanding to make futuristic weapons to fight off ghosts and the dragons those ghosts summon was interesting. And not just the weaponry, the armor was also really cool. I loved that, as advanced as the suits were, they were still realistic. The comparison was made to an Iron Man suit, but one that only has so much power to it. It makes the world feel that much more possible to me. Especially when Grigsby puts his actual firefighter experience to play. I've learned a bit more about fire than I had known before and plenty more about the day-to-day of being a firefighter.

And, of course, there's the dialogue. There's plenty of humor throughout the book because it's written from Brannigan's perspective, but the dialogue is where it really comes through. The Smoke Eaters live up to their motto of "Sink or Swim". I will admit, a few times I felt Brannigan was overdoing it in terms of speaking his mind or always putting himself in the line of fire with little thought to collateral damage (he costs the people around him). But, I suppose, that's his character. He's an old man set in his ways of running towards danger and calling people out on their bad habits that could get others killed.

That being said, I did get more into this story than I thought I would. I really hope there will be more books set in this world. If not, I'm still looking forward to more books by Grigsby. 4.5 hoots!