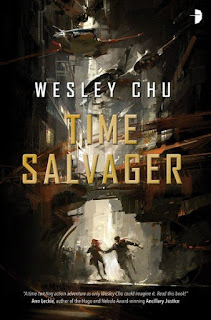 James Griffon-Mars is a rare breed these days. It takes a certain kind of personality to become a chronman (time traveler), let alone the highest level without snapping. James is close, frequently getting drunk and wishing he could stay in the beautiful past, but when he's offered a job that would reduce his contract to just 6 more months on the job, he has to take it.

This was one of those delightful books that took me completely out of reality and into a new world. I would read on the bus and whenever I looked up I'd briefly wonder where I was. Honestly, I can see why this one is being turned into a movie.

As in-depth as this book went into James' life and character, this book really felt like a survey introduction of a complex and interesting world. We got a really good look at ChronoCom, but not it's sponsors, the great corporations of the galaxy. We got a comparison of how much reality sucks for those born off-world, working in the mining colonies, and those born on Earth, surviving in unbelievable levels of pollution and radiation. It really makes me want to read more of this world. Fortunately there is a sequel!

I'll admit that the time traveler risking it all for a woman he's only known for a day felt a little like a trope, especially after he's already left behind so many people he could have saved. But the world is certainly a different take than the usual time travel stories I've read before. The notion that going back in time to rescue artifacts as energy sources for the present is definitely an interesting take on our current band-aid solutions for energy. The fact that it's got all the  rich, powerful corporate backing is another.

My favorite character, hands down, was Levin Javier-Oberon. His relationship with ChronoCom goes through a similar transition to James', if a bit of a faster one. He goes from the most loyal company man to being thrown into prison for betraying the company's interests. All the while, he is true to the purpose instilled in him by the company, the benefit of all humanity. Looking at what he sacrificed, what he truly believes in more than anything, I found him to be the most interesting character.

If you're looking for a different take on time travel or a engaging, easy read, I recommend Time Salvager. 4 hoots!