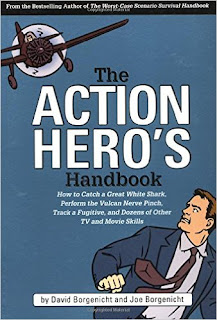 A collection of short How-To's written by experts in their various fields, compiled by David and Joe Borgenicht. Each section deals with all the everyday aspects of being an action hero from the mundane checking your hotel room for booby traps to the supernatural creating your own love potion.

This was a fun, even informative, book to read. No, I don't think I'll ever need to know the proper procedure to make sure my hotel room isn't booby trapped, but I do think it helpful to know a couple self-defense basics. I also enjoyed the diversity of information in this book. I never thought about it, but action heroes really do need to know a lot of different things. This book even covers some basic dance moves!

All of the information is provided by experts with years of experience. I greatly appreciated the authors including an "about" section at the end giving each contributor's credentials. The authors, themselves, take the information and make it applicable to the everyday life of an action hero. It makes for a fun and educational read. I know that I certainly learned some good techniques for getting away from potentially dangerous people and situations.

If you're looking for a light, yet informative read, I do recommend this book. 3 hoots! 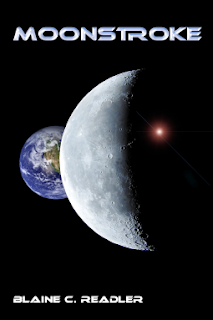 *Image and book provided by NetGalley for an honest review.

On the US moon base, on the side of the moon that never faces Earth, there is a group of survivors. Years previous, a giant sun-flare killed almost all of the adults. The survivors are their children, all grown up, and the few adults that were lucky enough to be inside. To keep the kids productive and free from idleness, they are taught all the skills they need to continue their parents work and mine all of the platinum they can find and that's all they're given. When Van accidentally gets access to the blueprints for the radio/comms room, things begin to change and change quickly.

Despite having a relatively full cast of characters, the theme of this book is isolation. Whether it is the physical isolation of the moon base from Earth and the other moon bases or the social isolation of the science and engineering groups from the mining groups. Heck, in a way they've even isolated an entire generation from the memories of their parents. The key challenge in all of this is isolation and its effects on individuals and the populace.

I really liked how Readler used this theme to shape his characters. I feel that there weren't any overplayed character tropes as a result. Yes, there were a couple of typical things, it can't be a space-isolation story without someone going insane, but I felt there was enough differentiation in cause to keep them from being boring. I found his characters to be intelligent, highly optimistic, but not so lacking in common sense that it was irritating.

Probably the only thing I wish the book had done differently was how rushed the ending felt. The majority of this book is spent getting the nexgens to start learning how much they don't know they don't know. When it comes time for the main conflict, it feels like everything happens in just a few quick chapters. It's quite the abrupt change in pace. I don't blame Reader for doing this, though, you don't want a book to be too slow and without the slower pace of this first part of the plot, world and character building would be almost impossible.

In all, this was an enjoyable book. There were even some surprises in it. One or two things near the end felt a little forced, but there was little to no something-out-of-nothing surprises. If that makes any sense. I recommend this for anyone looking for an easy read, space adventure with young adult protagonists. 3.5 hoots! 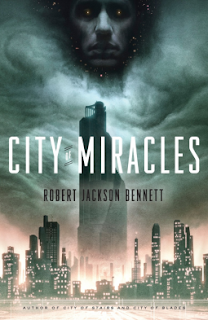 *This book was provided by NetGalley in exchange for an honest review.

It has been many years since the events in Voortyashtan that left Sigrud a wanted man by the Saypuri army. He's been in hiding, taking odd jobs and keeping a low profile, waiting for word from Shara Komayd. When Sigrud hears that she has been killed, it send him into a hidden war between the children of the divine and the shadows.

I absolutely loved City of Blades, the second book in this series (still need to read City of Stairs) so I was very excited to pick up this third book. Sigrud was such an incredible character in "Blades" that I was eager to see what he would do as a main character. Let me just say, it was awesome.

This book is such a wonderful blend of action, intrigue, magic and intelligent characters. The main characters have been doing what they've been doing for many years. They are old(er) people and it shows in their perspectives, their choices, their sheer common sense!

Once again, I find myself appreciating Bennett's ability to combine drama and action with  a healthy dose of humor. He makes every character decision and all the dialogue seem so natural. Not only that, but I actually didn't see the big twist coming! I kinda pride myself on being able to predict the flow of books, but there was one, really big twist that I just did not predict, even though all the pieces were there! I swear I was paying attention, but it still surprised me!

For the most part, I don't think you need to have read the full series to enjoy this book. Reading either of the previous books will help with understanding a lot of what's going on in the world overall. However, if you were to "walk into" this book without any knowledge of the world, I think you'd still be able to enjoy it! However, if you're not a fan of a lot of blood in your books, you will want to pick up something else. There is a lot of blood. 4 hoots!

Posted by Rachel Noel at 7:00 AM No comments: 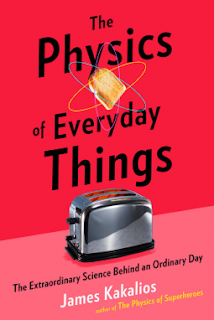 *This book was provided by NetGalley for an honest review.

Professor James Kakalios walks us through a day in the life of an "average" business person, pointing out various technologies we take for granted and explaining exactly how they work. Starting with your automatic coffee maker in the morning and ending with your TV and remote control. Find out just how much physics goes on in your everyday life.

I was introduced to Prof. Kakalios's work via his book The Physics of Superheroes and greatly appreciated his sense of humor and ability to speak physics in a language I can understand. Probably the best part about this book is a great resource on answering questions like "how do batteries work?" or "how does my phone store music and play it to me?" Turns out quantum physics plays a much bigger role in our daily life than we'd originally think.

Kakalios uses as much plain language as possible in his explanations. I was able to understand everything he talked about. This book was made for people with little-to-no background in physics. I don't think you'd even need a high school course in physics to understand Kakalios' explanation of how your toaster works.

I also appreciate that Kakalios goes into detail about the physics of medical equipment (in this particular "day" you go to the doctor's office). We often think of X-rays, MRIs and thermometers as strictly in the field of medical science. In fact, the principals that these technologies are built from are physics based.

This is a great book if you've ever wondered how something like Wi-Fi, batteries, noise-cancelling headphones, planes, etc. work. It's also a great book for answers to kids' questions about how things work. If you or your child have an interest in learning how things in the world around you work, I highly recommend The Physics of Everyday Things. 4.5 hoots!