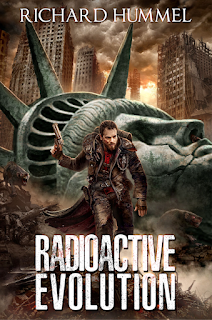 *Image and book provided by Publisher in exchange for an honest review.

Jared is a wanderer in the wastelands and, while not desperate for survival, he ain't living as easily as the rich people in the Floating Cities, high above the fallout. This changes when he finds an honest-to-god dragon and bonds with its baby. In bonding with the dragon, Scarlet, he uncovers a long lost plot from the cities, furthering the divide between those in the clouds and those on the ground. Between Scarlet's growing size and abilities and Jared's newfound powers, they have the means to bring justice for the long-lost dragon races as well as the civilians on the ground.

This was certainly an entertaining read. There was a lot of adventure, a lot of quick-thinking as well as strategy fights. There is a nice blend of action, comedy and even horror, and I'm not talking about the number to times Jared had to find new clothes because his were covered in giant rat guts.

If you're a fan of gaming, you'd probably enjoy several aspects of this book. If you're a Fallout fan, you'll definitely get some fun with this, as well as some of the horror. It gives some actual mechanics to a character's level-up and not needing to eat. It was actually pretty clever how Hummel set that up.

Unfortunately the editing appears incomplete. The telepathic conversations between Scarlet and Jared are identified with her voice in bold and his voice in italics. Throughout the book, or at least my copy of it, there were a lot of mishaps with this. The pacing of the book felt a little disjointed, but that could be Jared's need to sleep through his "power ups". The video game references and comparisons, while occasionally fun, did end up making it feel less genuine.

So, if you're a gamer looking for a foray into books or know of a gamer who's interested in trying some science fiction, this wouldn't be a bad book to start them out with. As for me, it was a nice book but I probably won't be picking up the sequel. 3 hoots! 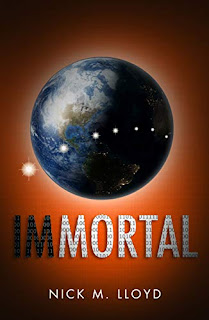 *Book provided by the author in exchange for an honest review.

The aliens have come, and they weren't subtle about it. Worldwide, every telecommunications device displays the same message: We are 'Aliens' You must obey us in full to survive A Gamma Ray Burst will arrive in 164 Earth days. Humans have no way of verifying the danger or the intent, but they can verify the signal is somewhere past Neptune. The next several months are spent following instructions from the aliens, while still trying to determine their true motives.

This book hit on a lot of my own personal worries and unreasonable phobias. We get to read about the risks of trading your personal data for free services, even if some of them are life-saving. And we get visited by aliens who are far superior to us in terms of technological capabilities. Yeah, this one hit a few of my fear sectors.

Almost the entire time I was secretly hoping it would end up being an elaborate hoax led by the characters MacDonald (an billionaire with a strong survival instinct) and his right-hand man, Charlie (a programmer who created code that makes NPCs in games capable of independent thought). Not much of a spoiler but, no, the aliens are real. Very real. And they've stationed hundreds of A-Gravs (think Space Storage Container) design to help humanity accomplish the goals of saving Earth.

Then we get the stories of Tim and Sam who developed a program called MIDAS that is capable of disseminating, analyzing and correlating data, in this case, personal data, right down to their DNA. Because she had been a victim of identity theft after her disabling car accident, Sam is very strict about making sure the data is anonymized (even if she never thinks it'll be enough). She even makes sure to set flags in place in case that anonymization is compromised. At the same time, they need to balance this out with MacDonald's demands. Tim keeps pushing Sam to 'play nice' so they can get paid the big bucks. She knows he wants that payout so she can get a surgery to give her back full control of her legs, but she's not willing to risk others going through what she did with the identity theft. It makes for a very interesting back-and-forth.

I absolutely loved Sam, and not just because she's a gamer girl and we get to see advances in gaming. In this world, virtual headsets are commonplace, and NPCs are way more advanced (I love Skyrim NPCs, but dang they're dumb!). Sam and her team, called "Bruised and Broken Bitches" because they're an all female, all wheelchair bound team, are highly competitive in tournaments. They're even a top tier team. She also gets to show us about the ways disabled people are treated. Some see her in a wheelchair and immediately look for a leg cast, others treat her only with pity, others argue that if she's able to get around on crutches (even if for just a short time) she's not really disabled. And that, coupled with Sam's "screw you, I've got this" mentality makes her, in my opinion, the strongest character in this book. And that's even compared to Colonel Martel who is not someone to screw around with.

To make things even more interesting and realistic, Lloyd gives us the multiple attitudes towards the aliens that we would expect. There are the people who believe that their arrival heralds a new religious movement. There are people who immediately think that the aliens are there to destroy everyone. He even breaks down the middle group into cautious pessimists and cautious optimists. It really helped to make everything feel more real.

This book was a very nice read. A very human story in a book about alien arrival. I happily give 4 hoots and encourage you to pick up a copy!