Dungeons & Dragons Stereotypes - Where do your characters fit? (Readathon Mini-Challenge)

Regardless of your relationship with Dungeons & Dragons, it's pretty safe to say you have heard of some of the tropes and stereotypes. Whether it's a Rogue with kleptomania, a Bard flirting with every NPC (non-playable character), the hippie Druid, or even the dreaded rolling of a Natural 1; D&D is rife with these things. 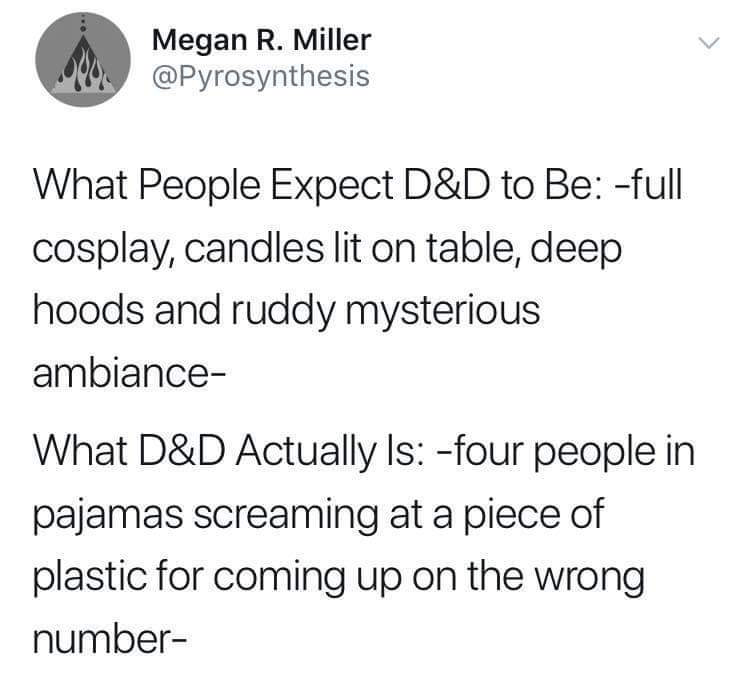 In the same vein, however, books are also full of their own tropes and stereotypical character types. Don't believe me? Check out Overly Sarcastic Production's long, long list of Trope Talks. And just like characters can have tropes, so can DMs/Authors. From some of the tweets, stories I've heard, an Author's characters can be just as disagreeable and surprising as a DM's players! 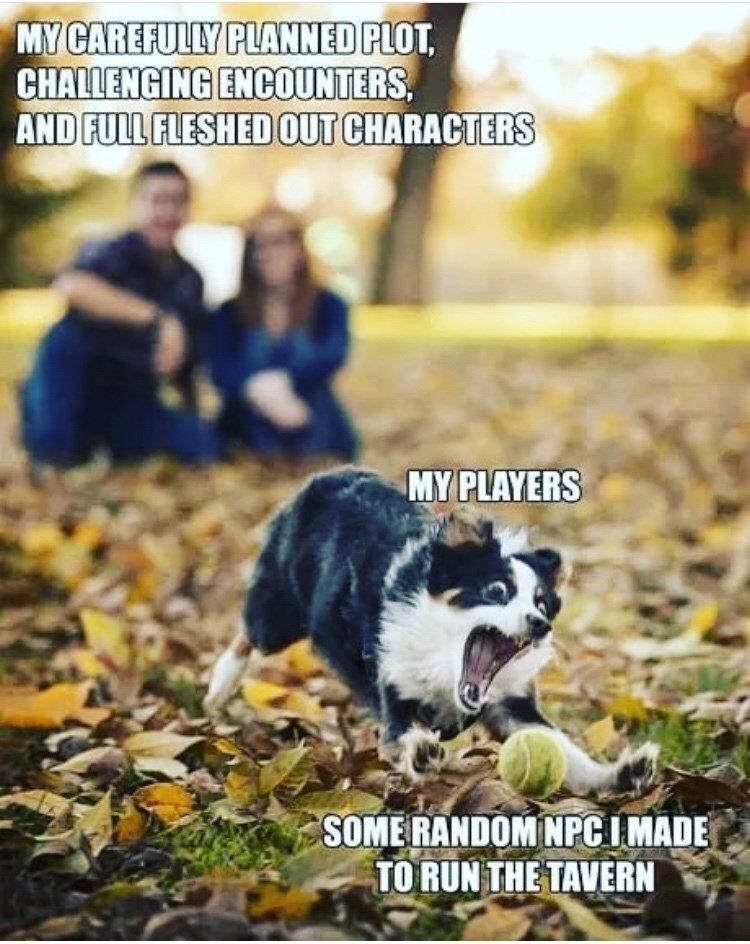 So I'm curious, what Dungeons & Dragons Stereotypes have you found in your books and which ones would you want in your party? Create an adventuring party of characters you've read and use 4 or 5 of the following stereotypes:

Some examples to help you out:

Neville Longbottom - Harry Potter - Ranger - He was always the laughingstock, but dang he got good closer to the end of the series.

Hellboy - The Hellboy Comics - Fighter - Even he admits he's mostly good for being able to take and dish out damage.

Whoever has the party I like the best, will win a $10 gift card to a bookstore of their choice (default to Bookshop.org). 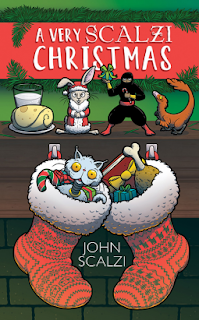 Summary:
A collection of holiday themed stories, some new, some old, written by John Scalzi.

Review:
This book is a collection of Scalzi's writing. They have several formats including interviews, prayer, Top Ten lists and script notes. Each chapter is delightfully different from the others. All of the chapters show off Scalzi's talent.

I'm always drawn to Scalzi's books because of his strong sense of humor, but I get invested in them because of his ability with the full range of emotions. This book is no exception. The cover, the title, they book evoke humorous responses. But the stories in here are not limited to laughs. There are still plenty of laughs, good laughs, that I really needed. But there are also some really, really good tears.

I also appreciate Scalzi's preface where he talks about how important Christmas is to him. I can empathize, and not just because it reminds me of the ending monologue in "Scrooged". Christmas has traditions that get us to think about others. Yeah, things suck, but Christmas is when we take the time to be more generous, more caring, and can make things better for someone else. Scalzi covers a lot of attitudes towards holidays in these chapters, but I love that the predominant emotion is hope.

This book made me laugh until I cried and it also just made me cry. I cannot recommend it enough (though if you do look for it, search via ebook. The print is $40, ebook is $6). I've already per-ordered the book and am looking to forward to sharing the joy of A Very Scalzi Christmas with loved ones. 5 hoots! 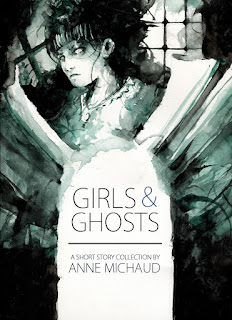 *Image and book provided by the publisher in exchange for an honest review.

Review:
Holy Wah!!! I am not exaggerating when I say that all five stories in this book were a delight to read. Each story was its own world with depth and well thought-out characters.
I sometimes have problems with collections of themed short stories because some of them end up being similar and with the same author for all of them, you'd think this would happen. Nope! Each story felt incredibly different. Each main character is their own person. Each story treats ghosts differently. Each story's world is very different. This collection was amazingly different from one story to the next. What you learned about ghosts in one story, wouldn't help you in the others.

Each story was a journey. The first story showed the interpretation of ghost sightings as mental illness. The second focused on generational ghost fighting to keep family safe. The third story (holy wah, I'd love an entire series based on this) was about the lengths people go to for the souls of their loved ones. The fourth was about how family isn't based on blood. The fifth story, that one was just, amazing and had me in tears (in a good way). And, at the core of each of these stories, you had strength, empathy and love. It was an amazing journey.

This was an amazing journey and I absolutely recommend picking up a copy. I'm going to be looking into more of Michaud's books because she is a very talented author. The ebook is only about $4 (price listed in £) and is very well worth the cost. I absolutely loved this book and cannot recommend it enough. I happily give 5 hoots!

How to Save Your Child | James Breakwell 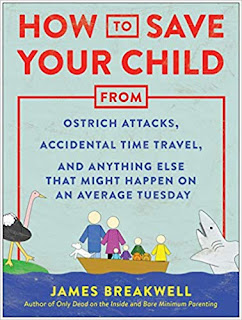 Summary:
Author James Breakwell takes us through another series of parenting rules for extreme circumstances. This book focuses on keeping your child safe, even from themselves.

I'm a big fan of Breakwell's books. I've been pre-ordering them with the confidence that they'll be laugh out loud funny and well worth the cost.That being said, this one felt "just okay". It was still funny, no question of that. I'm still glad I bought it and I know people who would enjoy it.
The book has all the classic elements that make a Breakwell book fun. You've got the clipart comics emphasizing the points he's making in the text. You've got the ridiculous graphs showing your chances of survival in ridiculous situations. The book is even dedicated to cheese! Who doesn't love that?

It really isn't until the second half of the book, when situations start getting more and more ridiculous, that things really lose their charm. Like, how to survive if you and your child are suddenly in the world of Carrie or The Shawshank Redemption or the original Donkey Kong video game. It can't be that the more unrealistic stuff is less funny; the chapter on time travel was good. I guess, maybe, it feels like the later chapters were more just filling up the page counts.

It's still an entertaining book, the latter half of it just feels lacking. I'm still glad I bought the book and will continue to by Breakwell's books. But this one is definitely not his best work. 3.5 hoots! 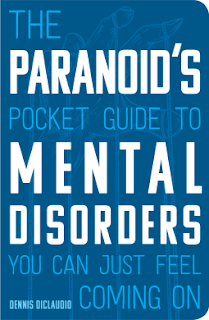 I saw the title of this book and knew I had to get it. As a former hypochondriac, for physical and mental issues, I knew I needed to read this book. Good news! I was able to tell myself, "Yeah, I don't have this" time and time again. This is likely due to how DiClaudio writes each section. Each disorder starts with a few questions for you, followed by an inner dialogue that someone with the disorder would have, and then the diagnostics and causes of each. That inner dialogue is a great help for paranoids to distance themselves from thinking they have this disorder or that. In the introduction, DiClaudio talks about wanting to present these things in a humorous fashion, while also being respectful to those with mental disorders. I have to say, I think he nailed it! His format made learning about these disorders engaging, without being overly sensitive or overly callous. This was a good read and I look forward to his other book, "The Hypochondriac's Pocket Guide to Horrible Diseases You Probably Already Have". 4 hoots!

Meet Me in the Future: Stories | Kameron Hurley 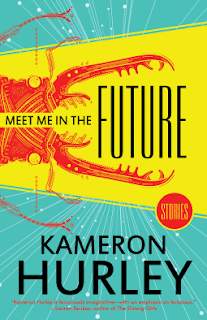 A collection of short stories written by Kameron Hurley. Some take place in other series she's written, some are standalone. All of them take place in the future.
Review:

I haven't read as much of Hurley's work as I would like, so I was very happy to pick this book up. I highly recommend you do not skip the preface of the book. In the preface she describes what was behind each story, what inspired this or that story, and it's very informative of what you're about to read. It also helped me empathize with Hurley more, we both have chronic health issues that have shaped our world view. You really see how it bleeds into her stories.

I admire Hurley's ability to combine telling a good story with asking important questions. She's able to do all of this without being preachy and, more importantly, can leave you with no answers and you're not disappointed. If anything, you find yourself driven to work harder for those answers. So, yes, there really aren't many happy futures in this book, but there is drive.

This collection was entertaining, moving and insightful. I was happy to read it. 4 hoots! 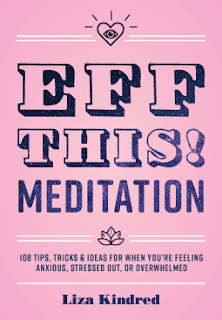 I'll admit, there was noticeably less cussing in this book than I thought there would be. But, given that that's my biggest complaint, I can honestly say this was a good read. I've been learning and reading up on meditation and mindfulness to help with my anxiety and depression. A number of things in this book are pretty well-known, but there were a few things that were new to me. I appreciated that Kindred ordered these by time. The first batch are things you can do quickly, the last are ones that take half a day or longer. If you're just getting into meditation, this might be a good fit for you. If you're looking for an irreverent take on meditation and its practices, you'll want to look elsewhere. 3 hoots!
Hoot!Hoot!