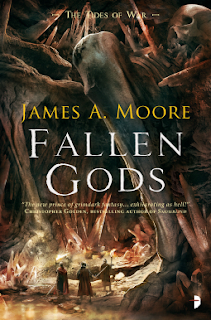 In this sequel to The Last Sacrifice, we continue the stories of Brogan McTyre, the most wanted man in a dying world and his struggle to escape capture from kings, slavers and demons while trying to find a way, any way, to defeat the gods that are destroying said world. The demon, Ariah, furthers his plans for world conquest through his most obedient servant, Beron. The kings of the world seek help from a new god/demon, Theragyn. And sorcerers from other countries have arrived to help.

I remember finishing up the first book and thinking that the author did a great job of summarizing the various plot lines and setting the stage for the second book while keeping it all interesting. I was pleased to find he continued this trend with the beginning of this second book. At no time during the book did I feel like I was getting an exposition dump. That did make it a little difficult to get back into the minds of the characters, but ultimately ended up making the overall book a much better read.

Similar to the first book, this is not for the faint of heart. There are a number of torture scenes that left me feeling queasy. They don't go into vivid detail but enough that, if you're squeamish at all, you may want to pass on this series. If you can stomach these kinds of things, I think you'll enjoy the read.

Despite the unnerving aspects of the book, Moore makes sure to include some much needed humor when needed. Stanna naming her sword The Bitch always made me chuckle. Niall's awkwardness was more endearing than annoying. Brogan's discomfort at traveling with a good friend's wife, who also happens to be a witch, was some much needed levity.

There are many character perspectives per chapter, but the transition from character to character, chapter to chapter, is easily followed. At no time was I confused about which character I was reading. And there are so many characters to read about and root for. Don't get me wrong, the bad guys are still bad guys, but there are so many more and intriguing characters in this sequel. I'm so glad we actually got to meet some of the rulers of this world. I really want to more about the enigmatic Jahda. That guy alone was enough to keep me reading! But Moore writes so many other characters that make you feel for them. It's awesome!

Another aspect I love about the multi-character perspective is that it's a great way to provide background while also giving the reader plenty of action to follow. When King Parrish is unable to explain how he and his Marked Men are changed by Theragyn, the reader is not left in the dark because we were given Morne's perspective during a fight and we saw how being a Marked Man affected her.

And, again, Moore proves he knows how to end a book. I was nervous that this book would end and I'd be disappointed because I didn't have the answers I was looking for. I still don't have the answers, but at the end of Fallen Gods my mood wasn't one of frustration but rather "I am so ready for the next book!" Seriously, the next one is promising to be glorious. If the world is actually going to end, it ain't going down without a fight and I want to read that fight!

I happily give this book 4 hoots and encourage you to read this, after you've read the first one that is. This isn't a standalone sequel. But the adventure thus far has been well worth the time.