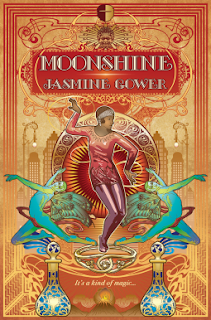 Daisy Dell has just scored her first real job after college. She's a typist/secretary for Andre Swarz at Pinstripe's. Modest pay, but it helps her work towards her goal of being a Modern Girl. When she finds she works for a magician who hired her in part because of her own magic (inherited in the form of trinkets from her grandmother) she gets introduced to the world of bootleg mana and speakeasies. When an attempt is made on her life by mage-hunters, she has to seek help from her boss and coworkers to survive.

This book was not what I was expecting, and that's a good thing. I genuinely thought this was an alternate, historical fantasy that would take place in 1930's USA. What I got was a fantasy world with as much magic as any other high fantasy world, but with prohibition era aesthetics. It was really cool!

The world is incredibly interesting and I want to know more about it. I greatly appreciated the difference in approach between Mr. Swarz and Daisy. His academic, political views of the world versus her aesthetic, social perspective really helped to flesh out the world. She's more likely to note the combined uses of magic and ogre technology where he is more likely to note the local politics and economic climate. The fact that this city of Ashland actually exists near a dying volcano that frequently covers the city in ash provided an interesting mental picture. Combine that with a culture that has incorporated (however begrudgingly) ogres and fauns, and you've got my attention. I really do want to read more about this world.

Then there are the characters. We only get to read the book from three character's perspectives: Daisy, Mr. Swarz and Ming Wei. These three are kinda all we need, though. As different as they each are, they are also surprisingly similar. All three have had to work from nothing to something, but Daisy and Mr. Swarz had plenty of family support while Wei needs to support her family. Daisy and Wei have good health while Mr. Swarz is physically disabled. Wei and Mr. Swarz are in charge of their groups while Daisy has never had any kind of influence or power. I really liked how Daisy and Wei almost bonded over their shared understanding of "a girl's gotta eat."

This book was a very enjoyable introduction to a very new world that I would really like to read more of. I'm eager to read more of Gower's works and encourage you to pick up a copy of Moonshine. 4 hoots!